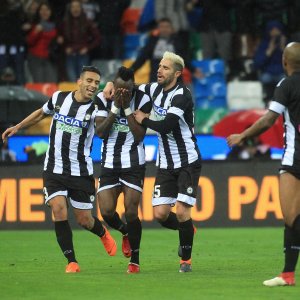 ROME – The Italian state has a team in the Premier League. Without its knowledge. The Spanish state has one too. The main characteristic is that the team is the same: Watford Football Club. It may seem like a joke, but there are at least two magistrates in Europe who aren’t laughing: Prosecutors Antonio De Nicolo, Udine, and José de la Mata, Madrid. Two inquiries have been opened for a while about the same subject: ‘The Pozzo System’.

El triangulo mercantìl
The Spanish prosecutor for Juzgado Central de Instrucciòn numero 5, in charge of financial violations, provided us with an explanation. “The object of the investigations are the alleged irregularities committed by Gino Pozzo and Enrique Pina Campuzano, by both the businesses and football clubs linked to them.” Namely, Udine, Watford and, until 2016, Granada. Three teams, three championships, one unique system. Gino, the son of Udine’s patron, Giampaolo Pozzo, is accused of fiscal fraud in Italy and Spain. Pina Campuzano, arrested one month ago, is the former president of Granada and is suspected of fiscal evasion and money laundering. According to preliminary papers examined by Repubblica, the three clubs form a triangulo mercantìl. “Revenues generated by the sale of players are systematically distracted from the tax authorities of the respective countries and end up in a Luxembourg holding called Fifteen Securitization.” According to the Spanish commercial register, there are no financial statements for 2015. “Fifteen is in turn linked to two other holdings in the same fiscal paradise: Gesapar and Kalmuna – the real owners of Udine Football Club. Both are controlled by Gino Pozzo.” So, Gesapar and Kalmuna. Not just any two companies. Giampaolo Pozzo has just 1.56% of Gesapar, whilst Gino has 0.1%. “In his book Fuori Gioco, Espresso journalist Gianfrancesco Turano writes that the first administrators of Gesapar are the trustees Giuseppe Volpi, Switzerland, and Jean Faber, Luxemburg, representatives of Sergio Cusani for the monies of the massive Enimont bribe transferred to the Banque Internationale in Luxemburg.”

Operation Watford
Italian and Spanish investigators agree on the purpose of the triangulo mercantíl, built on a galaxy of companies and Chinese nesting boxes, some of which are located in offshore countries. Collecting capital from Udine and Granada, hiding it from inland revenue and pumping it into the Watford vaults. “Thanks to Premier League TV rights it’s the Goose that laid the golden egg for the Pozzo System,” a financial expert says.
We need to open a parenthesis here: the rights of the English series A are very valuable. Just think that last season Sunderland, last in the standings, received £ 93 million: at the exchange rate, more than Juventus, champion of Italy, took. In the same season, Watford collected £102 million. The Pozzo family bought Watford in 2012, when it was barely unknown in the Championship, The English series B. The Italian businessman came in along with the Arsenal goalkeeper, Manuel Almunia, Marco Cassetti on loan from Udine and coach Gianfranco Zola. During its first year under new management, it reached third place. Finally, in 2015, promotion to Premier League, which Watford had missed for eight years.
For the Pozzo family this is good news on two levels: sport-wise and economy-wise. However, that’s when the problems began. According to the Udine prosecutor, first, and the Madrid prosecutor, second, promotion was obtained through massive fiscal evasion occurring losses to the Italian revenue and to Spain’s Agencia tributaria.

Phantom scouts
Italy’s finance police have been working on Udine’s case and its owners for two years. In its first search conducted at its headquarters, the police cloned the content from the server. Italy’s prosecutor’s office studied 24 investigations (including Spain, UK, Luxemburg, Montecarlo, Switzerland, Ghana, The Netherlands, China) which resulted in a questionable 63 million for nine seemingly non-existent transactions, evasion and tax inversion. From this total, about €40 million went to Watford, the rest went to Granada who partly forwarded it to the English club.
“That’s not true,” explains Gino Pozzo to Repubblica. “We have a report from Deloitte showing that Udine brought in more than it contributed during the period of high collaboration between the clubs.”
In terms of taxation, the Pozzis signed an agreement of 11.5 million to close the dispute with the Inland Revenue, explaining that it had taken down eight of the nine claims. the Udine criminal investigation, however, is continuing and will probably be closed within a couple of weeks. “We are positive that the dossier will be archived,” says Maurizio Miculan, lawyer.
The topic seems to go beyond relations with the tax office. At one of the preliminary investigations, the Italian Finance Police wrote: “It was possible to identify a series of evidence concerning the issuance of invoices for non-existent operations by Watford in relation to Udine, for a taxable amount of €16 million (…) with the sole intention of justifying the transfer of relevant capital from the Italian company to the foreign business, in any case owned by the Pozzo family.” Money which was used to buy good players and pass into Premier League. The invoices pertain to: (1) “evaluation of players transferred abroad”; (2) “acquiring knowledge of the Watford Academy”; (3) “scouting services”: that is, the activity to discover young football talent worthy of investment.

All the president’s men
In 2016 the Finance Police met with Unidad de Delincuencia Econòmica y Financiera of the Policìa Nacional for an exchange of information. The Spanish had already commenced investigations on Enrique Pina Campuzano, thanks to an informant inside Granada’s sponsor agency. In comparing the respective reports, the investigators were able to trace the endless company map of Giampaolo Pozzo’s “actual, official, simply-managed” participation. Dwelling in particular on the role of two key players in this story, Jordi Trilles Pardo and Raffele Riva. Pardo was the administrator of Grup Serton, to whom the income from Granada flowed. Riva, a lawyer from Lugano, was Watford’s President of Operations and CEO until 2016. Then he was engulfed by a bonds scandal. Scotland Yard is investigating a couple of HSBC bank guarantees which were produced during the Club’s acquisition and which turned out to be suspect. Riva was for Watford what Enrique Pina was for Granada. Now Pina is talking.

“Pozzo gave me the money”
In order to get out of jail, the former president dumped Gino Pozzo. During an interrogation on Monday, 19th February, the magistrate De La Mata questioned him about the Luxemburg investment fund Fifteen Securitization, the last 90-95% of the exchange between Granada, Udine and Watford. To distance himself from any responsibility, Pina declared “We never took action to identify who was behind the Fund. I trusted Gino, who was the owner. I think he was carrying out the negotiations.” His course of action is to present himself as what he was: not a real president, but a simple executor of orders that came from London. Where Pozzo is now resident.